To read this newsletter in an easy .pdf format, click here to download Smoke Points and Canola Oil.

Bad fats and oils will destroy your health faster than sugar.

They cause more problemslinkthan any other class of food.Paul Pitchford

Fats and oils (fats that are liquid at room temperature) are vital to support health and sustain life. They are also indispensable in the kitchen where they are used to tenderize foods, enhance flavor and texture, and provide a sense of satiety and satisfaction. In addition, cooks rely on fats because they make it possible to cook foods at temperatures well above the boiling point of water. This is because, unlike simple H2O molecules that quickly vaporize with heat, fats are large, complex triglyceride molecules (3 fatty acids attached to a glycerol). They tend to knit together at points along their long carbon chains, so a substantial amount of heat is needed to break their bonds and dislodge them from one another.

The temperature at which a fat visibly breaks down is called its smoke point. Smoke points vary, ranging from 225oF for flax oil and unrefined canola oil to nearly 500oF for refined canola and clarified butter (see table, p. 2). While damage to oils does occur before a fat begins to smoke, at its smoke point a fat vaporizes, leaving behind a liquid byproduct of bad-tasting, carcinogenic chemical residue. The fat no longer acts as a lubricant so foods begin to burn and stick; in addition, the remaining toxic chemicals spoil a foods flavor and can be harmful to health.

What Determines a Fats Smoke Point? Several factors in the natural makeup of fats influence the temperature at which they will breakdown and smoke. These include a fats saturation, molecular length, and the amount of free fatty acids (fatty acids not attached to other molecules) it contains.

Butter (technically butyric acid) is a saturated fat and therefore reasonably stable, so you might think that it would have a rather high smoke point. Instead, two factors work against its heat resistance: butters short molecular length (only 4 carbons, the shortest of all fat molecules) and its composition (included are some proteins and carbohydrates, which burn at relatively low temperatures). Butters 350o F smoke point can, however, be elevated by heating and removing these substances. The result is clarified butter which is far more heat- tolerant (see table below). 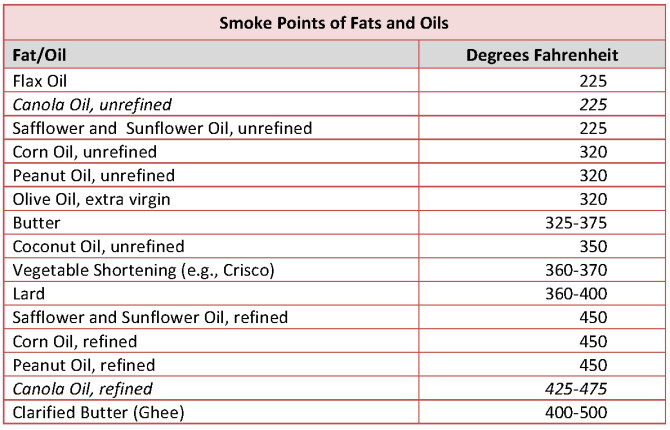 The freshness and purity of a fat also affect its natural smoke point: Heating/reheating and the accumulation of food particles and impurities will quickly reduce a fats smoke point. A fat that is heated repeatedly to high temperatures and/or contains residual food particles (as in fast-food deep-frying) will be damaged and smoke at successively lower temperatures every time that it is used. As a general rule, the fast food industry fails to take this into account.

In refining (see diagram, p. 4), fragile oils are first separated from the seed using high-heat mechanical pressing and solvents. In the process, oils are stripped of vital nutrients, such as lecithin, chlorophyll, vitamin E, beta carotene, calcium, magnesium, iron, copper, and phosphorus. Then oils are refined, bleached, and degummed, where at each stage they are subjected to chemicals and extreme temperatures. But, because high temperatures make oils go rancid and take on odors, they are then bleached with chemicals such as benzene and hexane and deodorized at high temperatures approaching 500 degrees. In the process, some omegas, especially the fragile omega-3s, become transfats. 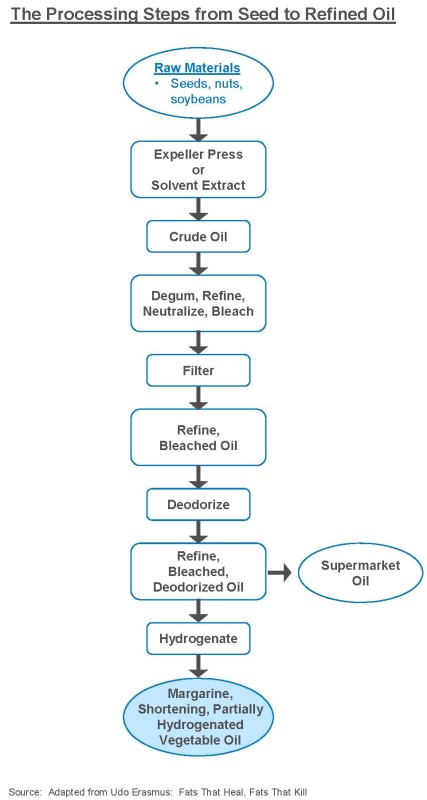 By the end of the refining process, there is nothing left to taste or go rancid, so you never know if refined oils are bad. But, stripped of their natural antioxidant protections, they are vulnerable to free-radical damage. Missing other nutrients, these inflammatory oils are linked to cancer because their denatured state makes it hard for the body to break them down.link

Concluding comments: I personally believe that all refined vegetable oils should be avoided. They fuel inflammation, upset metabolism, contribute to weight gain, and are linked to cancer and other chronic disease. As products of the postwar food industry, refined vegetable oils are untested food ingredients that lie outside the footprint of evolutionary experience. Degumming, stripping, bleaching, deodorizing, and pressure-heating vegetable oils were never part of family farming/food preparation traditions.

As far as cooking goes, there simply are not many healthy options for high-heat cooking. Our healthiest strategy is long, slow cooking at modest temperatures using traditional fatsbutter, unrefined coconut oil, and extra virgin olive oil. This is easiest to do in a slow cooker or a moderate oven. For stove-top, high temperature applications, clarified butter/ghee is a reliable and traditional choice (see recipe, p 7). But, because heat can damage oils well-before they smoke and because high-heat cooking can create carcinogenic acrylamides, foods cooked at high-temperatures are best eaten in moderation.

Because rapeseed is very adaptable to genetic manipulation, plant breeders have been able to develop varieties [such as canola]Because of its high levels of the omega-3 fatty acids, canola is partially hydrogenated for many applicationsUnhydrogenated canola oil that has been refined loses a substantial portion of its omega-3s.((Mary Enig, PhD, Know Your Fats, 120.))

Canola remains the rising star of the food industry, but as a new food ingredient and a genetically- modified oil, it is my least favorite of all the refined vegetable oils. I hate to come down too hard on canola because I have many friends in the food and nutrition field that use it often, but I feel that it has gained the spotlight due solely to the self-serving interests of the food industry. If canola can be banned from infant formula, am I being too harsh? While corn, safflower, sunflower, sesame, and peanut oils are inflammatory omega-6 oils, at least they are derived from real plants with centuries-long historiessomething that canola cannot boast.

Canolas Story. Rapeseed, the mother of canola, has no historic roots in Western dietary tradition. In its natural form, rapeseed is a most unlikely food because of its high concentration of glucosinolates. Glucosinolates are bitter-tasting natural toxins that interfere with proper metabolism. Rapeseed also contains problematic levels of erucic acid, a substance that is linked to heart disease.

Using selection-mutation breeding and DNA technology, botanists in the early 1970s were able to reduce the glucosinolates in rapeseed and transform most of its erucic acid into omega-9 fatty acids. The result was a low-erucic acid oil (initially named LEAR oil) plant that could be successfully grown in the colder climates of Canada and the United States. The first genetically modified varieties were quickly adopted by Canadian commercial growers, who renamed the oil canola, short for Canada low-acid oil.

The U.S. food industry quickly recognized the money-making potential of canola as the economical substitute for olive oil. Using its political clout, Big Food successfully convinced the USDA to bypass its normal years of research and testing to grant GRAS (generally recognized as safe) status to canola in 1985hardly 10 years after its initial development and a good 10 years before it began to appear on grocery store shelves for widespread use and real-life testing by the general public.

Once canola could be made somewhat palatable and won USDA approval, it did not take the food industry long to turn it into a major cash cow. Not only could canola be grown in the cold, inclement climates of the United States and Canada where other crops could not, but it could also be promoted as the healthy alternative to other vegetable oils, particularly since it ranks highest in omega-3s. In addition, canola welcomed genetic manipulation, allowing scientists to create varieties to suit just about any commercial farming preference, engineered to just about any need imaginable. By inserting transgenic genes into rapeseed-derivatives, scientists have been able to create Round-Up Ready, Liberty Link, Clearfield and other canola varieties.link With the strong marketing support of commercial farmers and the food industry, canola has come from nowhere in the last decade to account for about 10 percent of all edible oils sold in the United States today.

CanolaAll things to all people? The food industry promotes canola as the healthiest, most economical choice among vegetable oils because, of all the oils to choose from, it is the lowest in saturated fat (7%) and highest in omega-3 essential fatty acids (10%). Many professional cooks and dietitians are also told to use canola because it stands up to heat; it has a neutral taste that does not interfere with the natural flavor of foods; and, it remains liquid when refrigerated so it works well in salad dressings and marinades.

When we hear these claims particularly within the context of what we know about smoke points and unrefined versus refined oils in general and canola in particular, we need to ask, Which canola are we talking about?the one with a smoke point of 225oF or refined canola with a smoke point of almost 500oF? As much as the food industry would like us to believe that canola can simultaneously satisfy both claims, good sense tells us otherwise.

Canola cannot be both a rich source of healthy omega-3s and stand up to intense heat. Unrefined canola, a potential source of natural omega-3s, is too bitter, too fragile, and has too short a shelf life to claim supermarket shelf space. Only refined, damaged canola is marketed widely and readily available in grocery stores. The canola we buy is a manipulated byproduct of a very fragile, highly unstable oil composed of omega-3s that have undergone intense heat and chemical manipulation. The result is an oil that not only withstands heat but also contains transfats.

Some experts estimate refined canola contains 4.5% transfats.link Transfats are linked to heart disease, obesity and diabetes, Alzheimers, and infertility, to name a few. The food industry gets around labeling transfats because a serving can contain up to 0.5% transfats and still be labeled 0% transfats. But, since serving sizes stated on labels often understate how much we actually devour at a sitting, it is easy to consume a harmful level of transfats when eating processed and/or fast foods.

Concluding, summary comment. Canola is a GMO, untested by the USDA, and has no real-life track record. Unrefined canola is also high in omega-3s, making it a very fragile oil with a smoke point on par with flax oilan oil that we would never use in cooking. Due to it fragile nature, scientists tell us not to heat unrefined canola above 120oF. How, then, can virgin canola be refined at high temperatures and come out on the other end as a safe oil, free of transfats?

I personally believe that given its genetic status and naturally high content of fragile omega-3s, canola is one of the most dangerousthe highest in transfats and damaged moleculesof any of the refined vegetable oils.

Strategies to Promote Health. Since canola, like all processed vegetable oils, is used widely by the processed food and fast food industries, it is best to read labels, ask questions in restaurants, and cook at home with known ingredients whenever possible. When cooking, try to rely upon the traditional fats and oils that have supported good health through the generations:

Because the milk solids are lightly browned, ghee has a slightly nutty flavor.

You can substitute ghee 1:1 in place of vegetable oil when you bake; butter cannot be substituted in as simple a way.